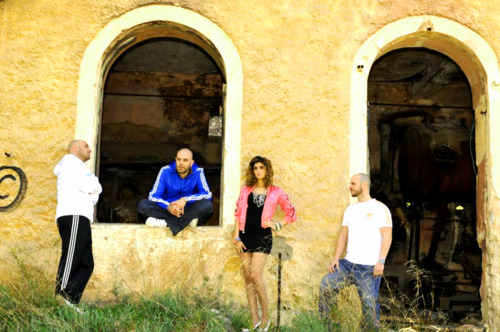 Translating into “leeward or sheltered from the wind”, Greek hip-hoppers Stavento have had it upwind all the way thanks to their potent mix of mainstream hip-hop, funk and R&B touches just for spice.

Their phenomenal success these last few years is partly due to a creative history that dates back over a decade. Founding duo Mihalis Kouinelis (aka Meth), behind lyrics and production, was a member of low bap outfit Vavylona and Kostas Lattas (aka Face) of Akrites. Both groups came under Freestyle Productions’ low bap idiom – a local brand of hip hop founded in 1992 by Greek hip-hop forefather BD Foxmoor (Mihalis Mitakidis) and Xray (Nikita Nils Klint) – aka Active Member.

Indie label Freestyle was home to some 40 outfits doing “low bap” or what they dubbed “true hip-hop with a louder and deeper bass drum beat and more emphasis on the word”.

And word up it is with these guys who do hip hop with a message that can be hard-hitting political and downright sexy at the same time.

Formed in 2004 in the northeastern Greek city of Alexandroupoli, Stavento released their debut album in 2005. “To Pio Glyko Methysi” (The Sweetest Intoxication) featured among others a sensual remix of “Omorfi” (Beautiful), a remake of a song popular pop/rock ’70s songsmith Kostas Tournas penned in the 1990s. Tournas’ Midas touch has made all the difference bringing a ’70s garage sensibility into the band’s sound. Funk and R&B grooves, tempting sub-beats, potent wordplay and gripping female lead vocals create an almost sexual interplay of harmony and rhythm.

The band, which as of late features 19-year-old, Cypriot singer Ivi Adamou as a guest star – saw their reputation soar with the release of their second album in 2006, Grifos (Riddle) and chart-topper “Poso Akoma” (How Much Longer) http://www.youtube.com/watch?v=TN34cgp1AFU – a beat-based caustic comment on apathy and inertia.

One of the band’s peak moments is “Mesa Sou” (Inside You), and more specifically the live version with Alexandra Koniak’s shrill intro vocals performed to a full house at the Greek Mad Video Music Awards in 2008. In the third refrain after an amplified silence… Eurovision superstar Helena Paparizou makes a lingering vocal appearance from behind the scenes. Once on stage in black hip-hop wear and gold stiletto heels, the crowds were ecstatic and remix stormed up the charts. http://www.youtube.com/watch?v=5GSIpPDFn70

“San Erthei I Mera” (That Day Will Come) off Mia For a k’ ena Kero (Once Upon a Time) featuring Adamou was the most downloaded track in Greece in 2010. http://www.youtube.com/watch?v=W6ENb473NI8

Other albums include Simera To Giortazo (Celebrating Today) in 2008 with “Prin se Gnoriso” (Before I Met You) a bouncy R&B number. http://www.youtube.com/watch?v=g-2xCr0NNOI

Their most recent release, the deluxe repackaged Restarted features a collection fresh cuts and guest performances.

This is some really fresh stuff. Crank it up and dive in.

♪ Check them out on: https://www.facebook.com/stavento

5 Quiet Greek Islands to Visit if You Want to Relax

When it comes to coffee, Greeks know it, make it, and enjoy it and the numbers prove it. From the all-time summer favourite “frappe” to the omnipresent Greek coffee, the art of coffee in Greece is much like every other Greek food- and drink-related practice. It’s about the “parea”... Read more