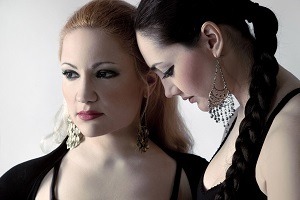 Technique or expressiveness: a fiercely debated subject amongst music lovers that ceases to exist in the divine presence of both. This much sought-after endowment is a way of life for siblings Eleni and Souzana Vougioukli.

Born and raised in the multi-cultural environs of Xanthi, northeastern Greece, the sisters have in less than a decade taken the local music scene by storm. With a select few performances in small venues throughout Athens, their following began to grow like wildfire. So much so that they are – as we speak – on their way to the Big Apple to take the stage at one the world’s music meccas: Carnegie Hall.

Theirs is a musical art form of harmony and custom. Performing in over 20 languages, the two girls turn to tradition for inspiration and training, absorbing the musical “wisdom” of the past while adding their own artistic signature and finally producing a distinctive creative outcome.

Whether it be Portugal’s lamenting fados, Irish ballads and drinking songs, the forceful American blues or the passionate songs of southern Italy’s Grecia Salentina, the Vougioukli sisters manage thanks to their extensive classical studies to deliver a practiced performance. But it is neither their impressive vocal skill nor correctness that sets them apart. As many of us will agree, technically gifted artists abound. The pair’s arousing vocal acrobatics linger into those deeper nooks and crannies of the soul, leading to the gratification and accompanying elation that only music can achieve. And this, my friends, is what artists from all walks of art strive to achieve. This is too what we the audience, starved of good sound, seek to find.

Both are professional musicians by studies… and choice. Souzana is a mathematics degree holder and speaks English, French, Spanish and Portuguese. While Eleni, specialising in Slavic and Balkan studies and economics, speaks Arabic and Turkish.

For both, folk music is an undying source of inspiration, a foundation to work on and from. Their vast repertoire includes the folk traditions of many countries and cultural groups including the Sephardi Jews, the Pomaks, the Armenians, the Roma, the Portuguese, the Grikos of Southern Italy, among others. The pair also performs rembetika. Here in the compelling “Kaigomai Kaigomai” (I’m burning, I’m burning) http://www.youtube.com/watch?v=YVGLhJyjNaI, a rembetiko composed by Stavros Xarhakos to the lyrics of Nikos Gatsos. The song was part of the soundtrack to 1983 film Rembetiko, a dramatic biography of one of the genre’s greatest singers, Marika Ninou.

With the accompaniment of only the bare essentials: classical guitar, piano or percussion, the Vougioukli sisters draw the spotlight to the human voice, its vast expressive range and its dynamics spectrum. Here in “Thriallida”, penned by Thomas Vougiouklis http://www.youtube.com/watch?v=3LLhB1V5br8

The Vougioukli sisters will be presenting their second album titled “To Be Safe” at various local venues throughout Greece. A Balkan-tinged mélange of rembetika and the blues, the CD is available through their website on http://www.vougioukli.gr

♪ On Friday, November 1, Eleni and Souzana Vougioukli will be performing at New York’s Carnegie Hall (www.carnegiehall.org). All proceeds from the concert will be donated to the families of the victims of the Boston Marathon bombings.

The Ultimate Guide to Greek Music

Eleonora Zouganeli: The Bold & The Talented

Five simple Greek ingredients to add to your diet to bring more health to your body and life... Read more